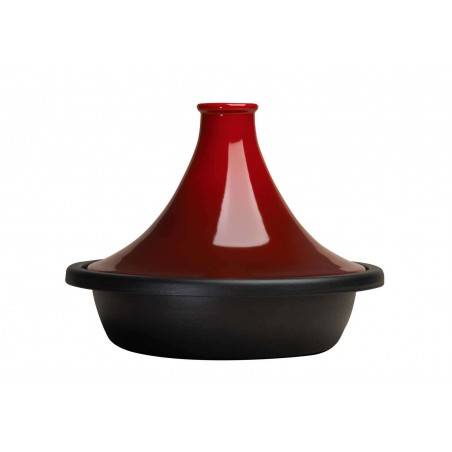 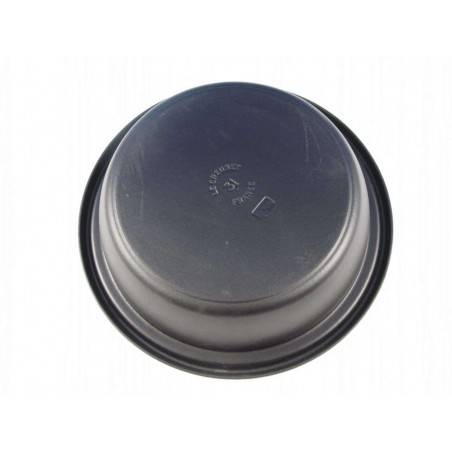 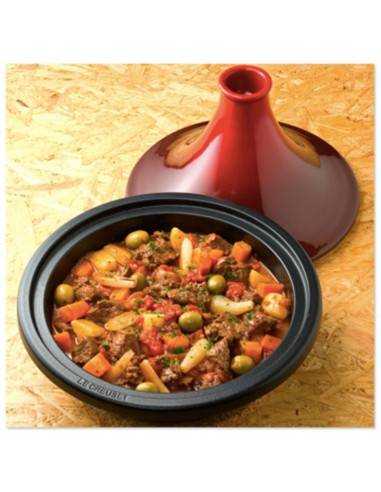 A Tagine is as significant to the cooking of North African food as the wok is to Chinese cuisine and its design is not by accident. Fuel and water are two precious elements in this region and both have to be used frugally. Charcoal fires are almost the only form of “cooking equipment” they have and the wide shallow base of the Tagine can be pushed down among the coals to take full advantage of the heat. The Le Creuset Tagine has been modelled very closely on the traditional design. However, as terracotta is not suitable to use directly on our hobs, the base has been recreated in cast iron. This allows for the very slow and even heat transfer, which a Tagine needs to provide for the food. The conical lid, which is made from glazed Stoneware, allows just the same pattern of re-condensation of the steam, but the glazed finish makes it less porous and therefore cleaner and easier to use.

09.2024
Grey
€8.00
Once wine has been opened, it is important to preserve it properly so as to enjoy the rest of the bottle another day. Used with Le Creuset's wine pump, the durable, reusable stoppers tightly seal an opened bottle of wine, preserving the flavour and aroma for up to seven days.

09.1890
Red
€121.00
Le Creuset Cast Iron Tatin Dish 25cm. Hand crafted from premium cast iron at our foundry in northern France, our Cast Iron Round Tatin Dish fuses tradition with modern design. A traditional tatin recipe tenderises and caramelises the ingredients on the hob first, before adding the pastry to the top and transferring the dish to the oven for baking. The...

09.0986
White
€23.50
Le Creuset pots and pans is a specialist cleaner for use on enamelled (cast iron), glass and glazes cookware. Its special formulation gently cleans and protects your cookware, removing unsightly burnt-on deposits. Regular use of Pots and pans will help prevent staining and gradually reduce any existing ones 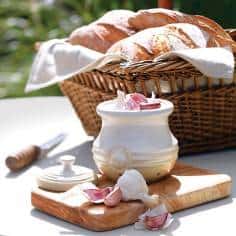 09.1815
White
€31.00
Le Creuset’s stylish Stoneware Preserve Jars will add a splash of colour to your table whether for an indulgent breakfast or a convivial gathering with friends and family. The stylish but practical Garlic Keeper in Almond is designed to provide an ideal environment for storing garlic heads and cloves, this stoneware garlic keeper by Le Creuset makes an... 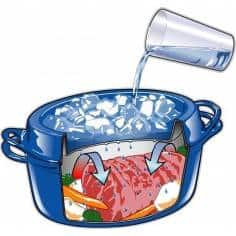 09.2404
Black Red Orange
€366.00
Cast-iron casserole. Heat Resistance: compatible with all heat sources including induction. Suitable for use in the oven at any temperature. Cleaning: wash in warm, soapy water. Dishwasher-safe. Use: perfect for cooking meat. Maintenance instructions included (may not be in English) Allows you to cook meat that is tasty and tender.

09.1911
Black
€37.50
The Kugelhopf Cake Tin is inspired by the traditional European yeasted cake of the same name. With a stunning, decorative finish, the Kugelhopf is also ideally suited for making unyeasted cakes jellies, blancmanges and mousses. The wide rim on the outside of our tin, featuring heat-resistant silicone inserts for added grip, makes lifting a full tin easier...

09.1922
Green Grey Yellow Blue Black Red Orange Pink Deep Teal
€18.50
The Silicone Professional Spoon Spatula is perfect for a range of kitchen tasks, including scooping portions, scraping baked on food and breaking up dense ingredients, such as minced meat. Our Silicone Utensils are designed to be comfortable to use and kind to cookware. They will not scratch cooking or food preparation surfaces, making them ideal for use...

09.2018
Red
€9.00
Le Creuset Honey Spoon Classic. This silicone accessory is ideal for stirring. It has a removable, dishwasher-safe silicone head. The wooden handle stays cool while cooking and the honey dipper makes the dosing of liquid honey easy.